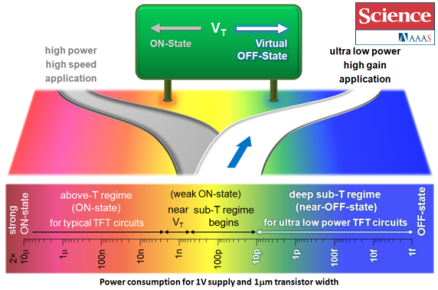 In 2017, the LEE lab was established at Pusan as another worldwide leading laboratory especially in the area of ultra-low energy / low power electronics, since the fundamental work was done by Prof. Sungsik Lee and Arokia Nathan at the Hetero-Genesys Laboratory, Cambridge University. Back in 2016, these two engineers introduced ‘Almost-off transistors‘ realised with thin-film technologies, making a strong foundation for a form of futuristic low-energy devices. It is naturally & fundamentally super energy-efficient, and also perfect for low cost and large area systems associated with a thin-film technology’s advantage, such as wearable sensor systems in the IoT, where ultra-low power consumption is essential without a concern of speed (see the related our Science paper, press release: Many News Media and Korean News).

Based on our world-wide leadership in the semiconductor device research, the LEE laboratory is aiming for changing the world in terms of semiconductors, physics, and electronic devices for the futuristic electronic life. In order to do this, we are working on research projects funded by NRF, PNU, etc. In conjunction with this,  our lab is supported by the national program, such as BK-21 Plus. As reflected in our publications, the LEE lab is one of the strongest groups in the research area related to semiconductors, physics, and electronic devices. The detailed information is shown in each menu listed below:

Copyright (2017 onward)
The LEE Lab – All rights reserved
for contents which we created.